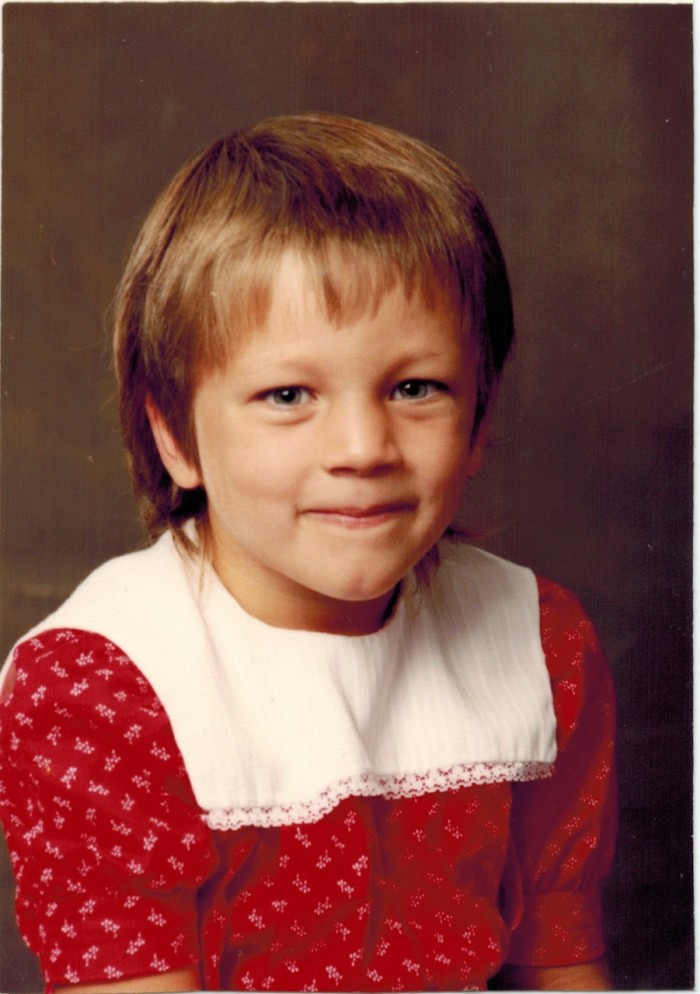 I’ve been thinking a bit about my inner child lately as a part of a personal/spiritual growth course I’m taking at the moment. I’ve come to realise that there are parts of Little Deb that I have abandoned or rejected because she experienced these very feelings and I don’t want those feelings to be a part of my now life. The problem with that, is Little Deb won’t experience the healing needed until I extend my Big Deb love and kindness to her – so, let me introduce you to one of the quirkiest, coolest, most loveable little girls you’ll ever meet.

Little Deb rocks the mullet like no-one else rocks the mullet. No-one believed her when she got older and she told them that she had sported the most worthy fe-mullet for ten years of her life. That was, until, they saw the pics and were completely awe-struck. One of the funniest moments of her adult-life was finding a photo at her BFF’s house of said BFF with an almost identical childhood mullet – only to discover that they had shared the same uber-lovely, but not-so-gifted, mobile hairdresser.

Little Deb’s sense of fashion pretty well matches her amazing haircut. She occasionally has a moment where she thinks about being cool or trendy and risks mortal peril by stealing an item of her sister’s clothing in order to experiment with fashion. But for the most part, Little Deb is a total creature of comfort. Her favourite outfit consists of a threadbare black corduroy black A-line skirt and a pair of jelly shoes that are broken at the heels. Her mum tried throwing the skirt out once, but thankfully her sister told her about it, so she was able to rescue her most treasured item out of the rubbish sack before it could be permanently ripped from her life.

Most kids are quirky to some degree, but Little Deb really takes the cake. She loves to swim and would spend all day in the water if she could. The only problem is that sometimes the water gets up her nose, and it really hurts. But it’s ok – she’s discovered that if she bobs up and down breathing out on the bob-down, it soothes her wee sinuses and it feels really good. She kind of knows that people are looking and laughing when she’s on her bob-round the pool, but she really doesn’t care. In fact, she kind of feels sorry for them that they’re missing out. And she cannot for the love of Pete figure out why her mum won’t let her ‘mail’ leaves and stones in the neighbour’s letterboxes when she’s playing ‘postie’. So unfair.

Little Deb has an incredible imagination. She has managed to convince some of her friends that if they wrap certain dead flowers in their leftover morning tea glad wrap and leave them in a certain bush for a few days, they will turn into real gold. She’s also started a lunchtime game called ‘The Handicapped Four Eyed Geeky Express’ (she’s not terribly PC). Her very favourite game of all-time is the Bee Clinic…all you have to do is stand on a bee until the white stuff squishes out, then you ‘operate’ on it with a stick until it’s all better. It’s a miracle she hasn’t been stung by any of her patients yet…although to be fair, they’re not terribly active once she’s finished with them.

Little Deb has two great life ambitions. The first is to become a famous singer (however, believe it or not, she’s not that good a singer), and the second is to be locked in the Foodtown supermarket overnight by herself. She lies awake at night figuring out which aisle she’d go down first, and which treats she’d consume, in what order. Needless to say, she’ll do almost anything for a bag of lollies.

If you’re looking for a fun, imaginative, loyal friend, you need look no further than Little Deb – plus as an added bonus, she’ll almost certainly make you look more fashionable. She’s such a cool wee girl, and I love her to pieces.